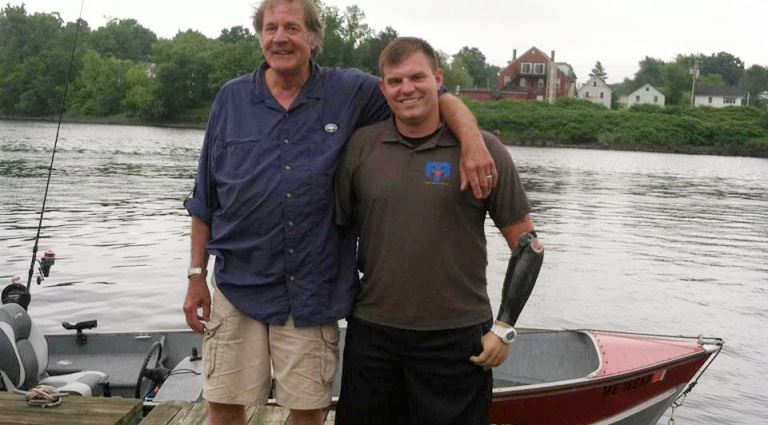 While many across America will be outdoors this Memorial Day, retired Army Lieutenant Colonel Tim Hoffmann will be in his truck driving more than 1,000 miles from Maine to Indiana to help veterans in need.

It all started in 2013 after Hoffmann retired from both his civilian and Army Reserve careers in Nursing Administration. As a lifelong fisherman and boater looking for ways to give back, he saw an opportunity for the boating and fishing industries to come together to help veterans.

“We could reach many deserving vets who had served in combat and were experiencing significant challenges and hardship on their return to civilian life,” said Hoffmann, who was drafted into the military in 1968 during the Vietnam War.

In 2014, Hoffmann and his daughter Ann launched Vets On The Water [VOTW], a Maine-based nonprofit dedicated to helping active duty, disabled veterans and Gold Star families experience and enjoy time on the water. Activities include fresh and saltwater fishing, sailing, cruising and ice fishing.

While Hoffmann would normally be on the water with veterans this Memorial Day, he instead is adding another boat to the VOTW program – a specially adapted SunChaser Geneva 22 Fish Deluxe pontoon by Smokercraft with a Yamaha Outboard engine, electronics from Raymarine and a trailer from BassPro.

On Sunday, May 27, Hoffmann and his daughter are departing Rockport, Maine for the Smokercraft headquarters in New Paris, Indiana – a 16-hour drive taking place over Sunday and Monday, Memorial Day. On Tuesday, Hoffmann said he plans to tour the facility and meet the entire Smokercraft team before heading back to Maine with the new boat in tow – arriving just in time to prep for another day with Vets On The Water.

Phil Smoker, Smokercraft Vice President of Sales, said the pontoon is the second boat the family-owned company is donating to VOTW. He said the addition of the pontoon will provide veterans in wheelchairs an opportunity to participate because of the accessible boarding and ability to more easily maneuver around the deck.

“We love what he’s doing for our vets and we hope that the program only continues to grow,” said Smoker.

VOTW is entirely volunteer based. There’s no overhead costs and 100 percent of every donation, whether fishing or boating products, gas cards or meals, goes to veterans. Because of this, Hoffmann’s mantra is that the program belongs to all who give their time, equipment or services to the cause.

Hoffmann also works with the VA Maine Health Care System in Togus, which identifies eligible clients, obtains physician orders for participation and provides transportation and VA staff on each watercraft during the weekly trips.

Weather permitting, Hoffmann and his team of volunteers conduct nearly 60 trips per year for an estimated 1,000 veterans.

Shortly after the program first launched, Hoffmann reached out to TACO for some aluminum rod holders. After speaking with Mike Kushner, TACO’s Vice President of Sales & Marketing, Hoffmann said he was surprised when a pair of brand new Grand Slam Outrigger Mounts, Aluminum Tele-Outrigger Poles and a pair of 4-rod Aluminum Rod Holders arrived at his house just five days later.

“I think we’re the only people in the country who are using outriggers for fishing mackerel, which is a very small fish,” said Hoffmann. “But it allows us to get another two or more lines in the water and not get tangled.”

Hoffmann also connected with Thom Dammrich, president of the National Marine Manufacturers Association [NMMA]. Together with the BoatUS Foundation, the American Sportfishing Association and the NMMA, Hoffmann is looking for ways to replicate the VOTW program throughout New England and potentially nationwide.

“What I really like about Tim’s effort is that it’s totally volunteer driven,” said Dammrich, who first learned of Hoffmann and the VOTW program two years ago. “He wants to find other volunteers like himself in other parts of the country who are willing to take this on, with the support of the boating industry, to get veterans on the water.”

Hoffmann said he is optimistic VOTW will continue to grow because of the many organizations and individuals who believe in the program.

“I had the idea, but the program truly belongs to the people who participate and support it,” said Hoffmann. “We create the opportunity for the vets, but the real opportunity is for people like Mike Kushner and others, the boaters and fishermen, who step up and take the vets out.”

Looking to the future, Hoffmann is hoping to network with scientists from the Woods Hole Oceanographic Institution in Woods Holes, Mass. to plan offshore shark and bottom fishing excursions. Additionally, he said he has no plans of slowing down his work for veterans in Maine and the surrounding areas.

While the VOTW does not have an official Web site, Hoffmann encourages veterans and others who want to learn more to visit the organization’s Facebook page, “VETS on the WATER.”

In the coming days, we’ll be posting updates about Hoffmann’s road trip and Smokercraft visit to our TACO Marine Twitter and Facebook pages. Until then, thank you to all the amazing military men and women who have served our great nation. We wish everyone a happy and safe Memorial Day.