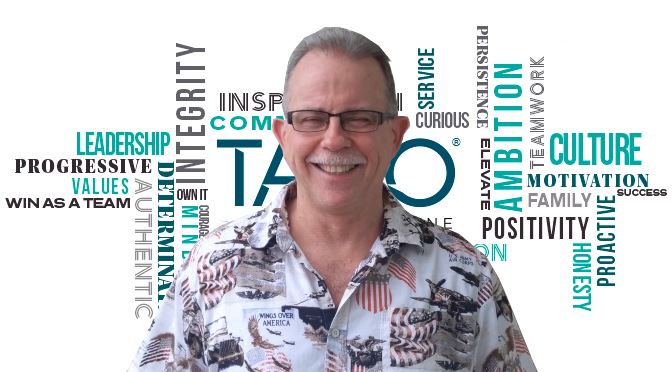 This Friday, July 12, long-time employee Gary Beasley is set to say his trademark office goodbye of "Hasta la TACO" for the last time when he retires after a remarkable 36-year career with TACO Metals.

Beasley’s first day at TACO began almost exactly 36-years ago on July 13, 1983, in Clearwater, Florida. At the time, the Florida native recently finished active duty with the United States Air Force and was painting fiberglass-textured coating on houses for work. A friend at the gym, who was working for TACO at the time, recommended Beasley apply for a job at the company.

On Saturday, July 9, 1983, while covered in paint from head to foot, Beasley met with TACO VP of Marketing & Sales Mike Kushner, who interviewed him and ultimately offered him a job in the warehouse on the spot.

“What stood out to me was his overall work ethic and the fact that he was looking for a good opportunity,” recalled Mike Kushner, who said Beasley was up for anything, no matter the task.

Over the years, Beasley’s hard work enabled him to move into a host of roles within the company, including Outside Sales, Inside Sales and Customer Service with a focus on architectural railing. In fact, Beasley’s impressive company resume dubbed him the “walking archives of TACO” amongst his colleagues.

“He’s the go-to product guy,” said TACO President Jon Kushner. “He could talk about all the generations of products.”

With a self-proclaimed gift for numbers, Beasley doesn’t dispute this moniker.

“I could quote you every part number from our book,” said Beasley. “I could still quote you all the dimensions of our pipe sizes, even though I don’t work with pipe anymore.”

TACO VP of Manufacturing Bill Kushner echoed his brother and said Beasley’s knowledge and experience will be hard to replace.

“His ability to be able to piece together a lot of TACO tribal knowledge is hard to explain and hard to teach,” said Bill Kushner. “He carries a lot of information and has been integral to TACO. To try to transfer that knowledge and replace it with somebody else is going to be difficult.”

Recognizing the longevity of his career, Beasley jokes that he’s been at TACO for so long that he used to chisel orders into stone tablets.

For Beasley’s colleagues, his sense of humor along with his determination to do a good job for his customers will be greatly missed.

“He is awesome, so very sweet and a pleasure to work with,” said Warranty & Repair Coordinator Judy Parliment, who has worked closely with Beasley for more than 10 years.

“Gary is always striving to be the best employee he can be, and is dedicated to taking care of our customers,” added TACO Customer Service Lead Katherine M. “He is also dedicated to TACO and has made sure to share his wealth of knowledge with the team.”

When he isn’t at TACO or at home with his wife, Joan, Beasley is often found at the gym pumping iron, a habit engrained in him from his time in the military.

“I just remember Gary in his tank top and his tight shorts,” recalled Mike Kushner of Beasley’s time the warehouse. “He was really into weightlifting and that’s how I picture him still. He’s always pumped up and muscular.”

It is because of Beasley’s passion for weightlifting that he befriended fellow fitness buff Jeff Trompke, a TACO Outside Sales Representative who joined the company more than 26 years ago.

“I owe my career direction and success to Gary, my friend,” said Trompke. “He will be missed, but we live close and will stay in touch.”

“Having been an Air Force brat for 26 years, I have the utmost appreciation for all those who served in our armed forces, and this includes Mr. Beasley,” said TACO Customer Service Representative Bob Mitchell. “Gary carries himself in the utmost professional manner and is courteous in all that he does. His dedication and thoroughness day-in and day-out speaks volumes of his character.”

Looking back on his career with TACO, Beasley said he is astounded at the company’s evolution.

“I can’t believe the number of products that have been developed and put into the market since I’ve been here,” said Beasley. “The stuff that goes on behind the scenes with us, I cannot even begin to explain. There’s so much work that goes into that stuff, it’s hard to believe.

For his retirement, Mike, Bill and Jon Kushner each said they wish Beasley health, happiness and relaxation, along with the caveat that he will always have a home at TACO.

Additionally, whatever Beasley does in retirement, Mike Kushner said he is confident he will succeed.

“Whether it’s travel or taking up other interests or hobbies, Gary’s always been very driven and hard working,” said Mike Kushner. “My wishes really would be that he and Joan get to enjoy the rest of their lives.”

From your entire TACO family, thank you, Gary, for your years of dedication, your wealth of knowledge and your friendship! You will truly be missed and we wish you nothing but the best for retirement. Congratulations, Gary!